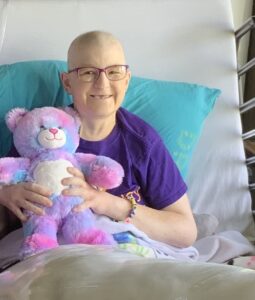 Most people can agree that a teddy bear has the ability to provide comfort and a sense of calm when it is needed most, regardless of your age. And the opportunity to “build” your own bear makes it much more meaningful.

A Legacy Becomes a Wish

Megan Foster, After Hours RN at EverHeart Hospice, had initially recommended Amy Pearson, Music Therapist, visit Margaret to create a Legacy Heartbeat Bear for Margaret’s family. Megan shared, “I felt that a bear with a recording of Margaret’s voice and heartbeat would help comfort her loved ones when she couldn’t be there anymore. I knew her boyfriend would also have a rough time, and having a special stuffed animal would help comfort him when he missed her.”

While visiting Margaret to record her message and heartbeat on a special stethoscope, Amy Pearson showed Margaret the bear where the recording would be placed. That was what sparked Margaret to tell Amy about her desire to make her own teddy bear.

Amy stated, “Her reaction to seeing the legacy bear was priceless! She shared that she had always wanted to go to Build a Bear to create a bear herself but being on hospice and having limited ability to travel, she didn’t think she could go. After hearing her say that, I knew it was a “Corynna’s Wish” that our agency could help fulfill!” 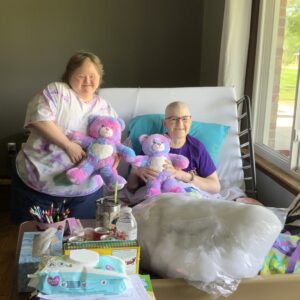 From left: Melissa and Margaret show off their matching bears

Margaret’s care team knew it would not be in her best interest due to her medical needs to travel all the way to an actual Build a Bear workshop, so they decided to bring the Build a Bear workshop to her! Keeping her favorite color, purple, and her bright style in mind, the team quickly ordered all supplies needed to make this experience happen for Margaret, including arranging for her best friend Melissa to join her in building a matching bear!

The bond between the two best friends was immediately evident as Melissa arrived to help join Margaret for her special day. Melissa even created a song to sing for Margaret to show her how much her friendship meant to her.

All of Margaret’s closest friends she used to work with also came to her home to show their support. Margaret and her caregiver and mother figure, Mo, said this was even better than going to Build a Bear because all her friends and family could be at her house to watch her fulfill her wish. 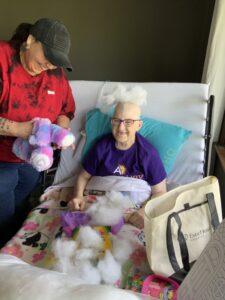 Mo helps Margaret stuff her bear in between laughs!

Margaret’s sense of humor shone as both women got to work making their bears “come to life” while stuffing them. Her smile was contagious, as the entire house was filled with love and joy watching Margaret create her special bear. Mo even got in on the fun, as she helped Margaret fill the bear with stuffing between Margaret playfully trying out a new hairstyle and showing off her best version of a Santa beard! You could feel that these were memories that both of them would forever carry in their hearts. 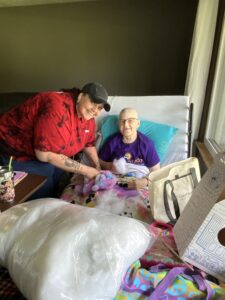 Maggie Salem, Margaret’s primary nurse, shared, “Our time on earth is so precious and limited. Moments like this enrich the human spirit, fostering an environment of deepening compassion, joy, and love for one another. Granting this wish meant the world to this patient and consequently brought us all closer together in a shared unity of love.” 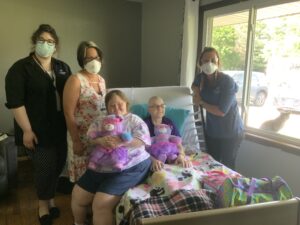 Margaret’s care team from EverHeart Hospice, including Nicole Puderbaugh, Hospice Aide, and Amy Pearson and Jeralayne Ruiz, Music Therapists, also joined in on the fun, taking turns helping her with the stuffing and dressing the bear in its bright purple dress and glasses. Amy even led both girls in a special wish ceremony to bring their bears to life. 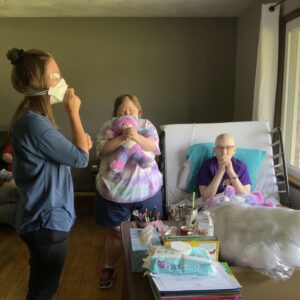 The last step in creating your special bear is picking out a name for it to put on its official birth certificate. When both women were asked what they would like to name their bears, Melissa quickly lit up and said, “I want to name my bear Margaret!” She said that would allow her to always think of her best friend when she cuddled her bear. After asking Margaret if that was ok, Margaret quickly responded, “Yes, and I want to name my bear Melissa.”

After making their wishes, naming their bears, and dressing them in matching outfits, the afternoon was complete with Margaret’s favorite Big Mac meal from McDonald’s! 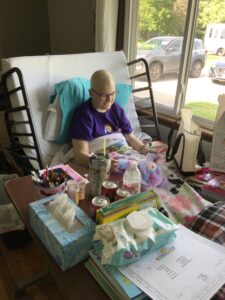 Margaret getting a first look at her bear!

The impact of her wish come true carried over to make a lasting imprint on the EverHeart staff as well. Amy Pearson shared, “The absolute delight on Margaret’s face when she first pulled that bear out of the bag is something I will never forget! She was able to have her best friend come to her home and share the experience of stuffing the bear and adorning it with matching clothes and accessories. What an honor it was to be a part of such a memorable moment in her life!” 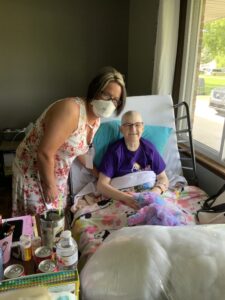 Nicole Puderbaugh visited Margaret shortly after her special day and shared Margaret’s lasting thoughts about her experience. “This meant so much to Margaret! I asked Margaret what her favorite part of that day was. She got a big smile on her face and said the friendship and love of everyone being there with her.”