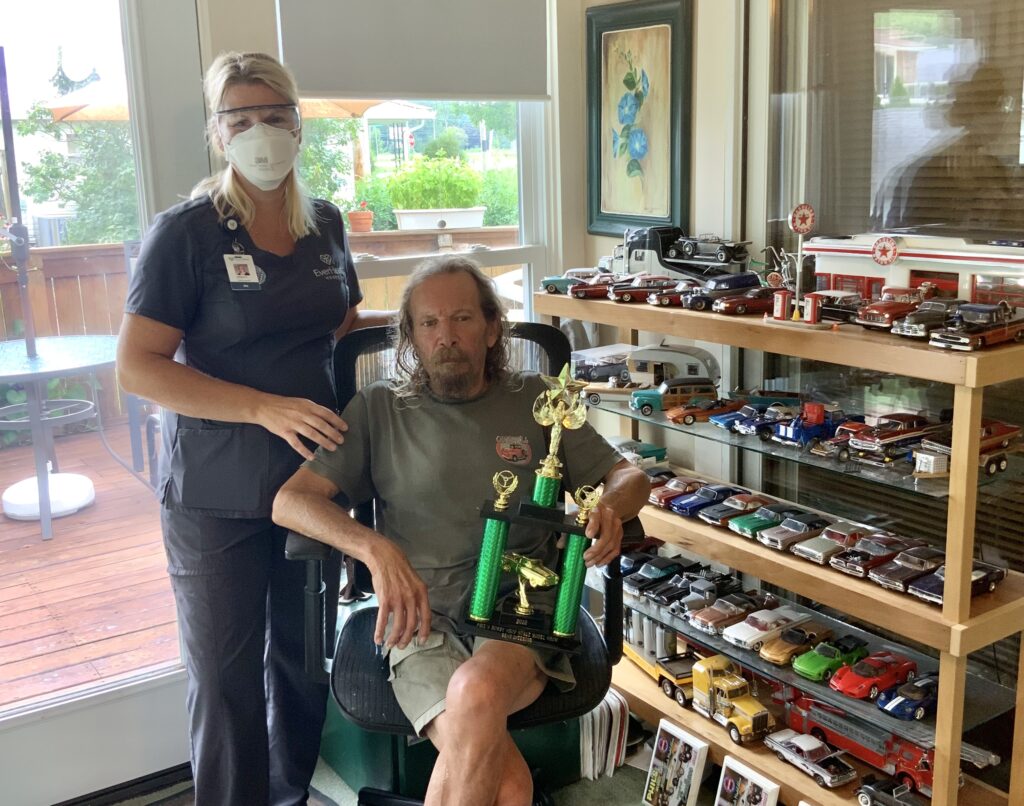 Kelly Mast remembers building model cars as a child. About three years ago, he received the news that he had a serious medical condition, and his outlook was poor. Because of his cancer, he was not able to get around as much and didn’t have anything to do. That’s when he was inspired to rekindle his childhood pastime and resume painting and building model cars.

According to Mast, the cars he builds are 125th scale models. The supplies are purchased in a kit and then assembled and painted. He always customizes them to make them his own creation, rather than following all of the details on the kit. 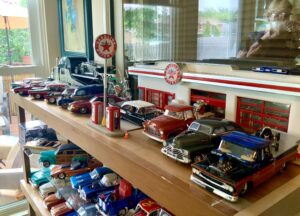 Mast’s collection of over 70 model cars, including a model Texaco station

Mast shared with his hospice nurse, Jessica Sheets, that this is the first prize he has ever received. When she was at his home making a visit, Sheets could tell just how excited he was about this accomplishment.

When asked how winning the award made him feel, Mast responded confidently, “Satisfied!” He felt there was a large group of people who participated, and said, “I was proud.”

Ed Ferguson is the chairperson of the group that organizes the car show and is also the President of Pharoah’s Car Club Bluffton, Indiana chapter.

“Pharoah’s Car club is a national organization. Our chapter application was approved about five months ago,” he shared. Prizes at the Phil’s Hobby Shop Memorial Car Show are awarded for the top 25 entries as well as special prizes for Best Engine, Best Paint, Best Interior, and Best of Show. The plastic model show is held in conjunction with their full-size car show. 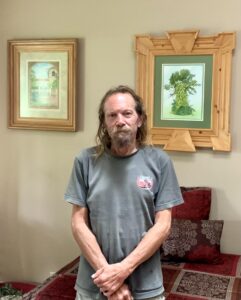 Mast with his paintings and handcrafted wooden frames

Mast’s creativity is not limited to just model cars. Throughout the home, several of his watercolor paintings were on display, adorned in handcrafted wooden frames that he built himself. Kelly pointed out two specific paintings he created, one of a Naples Florida courtyard, and the other of a knotted pine tree at his parents’ home in Florida. At one time, his paintings were represented by an art gallery in Naples, Florida.

Today, Kelly’s creative focus is on his model cars. In total, Mast has completed about 70 different cars in all different varieties and colors. His cars are neatly displayed on a wooden shelf, where he even has a model Texaco fuel station.

His favorite kind? “Fast ones!” he chuckled. “Really though my favorite one is always the one I am working on. Then when I start something new, it becomes my favorite.”

For information about the Pharoah’s Car Club Bluffton chapter, contact Ed Ferguson at 260-273-1447.

For more information about EverHeart Hospice, visit their website at everhearthospice.org or call 800-417-7535.